September 23, 2011. Lucky me, to have a Traildriver today! (Different than a slavedriver, of course.) Mary Rasmussen brought her knitting and reading to do while waiting for me to accomplish the Great River State Trail. How nice to be dropped off at the beginning and met at the end, so that I didn't have to double back.
On the way down to Onalaska, Wisconsin, where the trail starts, we checked out where the trail ends, so that Mary would know where to meet me. This was a good thing to do, because the end of the trail is rather obscure. It looks like someone's private driveway, but it leads to a parking area for the trail end.
The drive down to either the trail head, or the trail end is beautiful. Take WI 35, which runs along the Mississippi. To shorten time, Interstate 90/94 (taking 90 off I90/94 to LaCrosse/Onalaska) could be used (north/south) to connect to Hwy. 35, but since we were coming from the north (Menomonie) we took state highway 25 to Hwy. 35, and enjoyed the river drive. It really is one of the spectacular scenic drives anywhere in the USA. The little river towns are historic and so pretty.

So..........how to find the trail end. Travel south on Hwy. 35 to Marshland, a blip in the road between Fountain City and Trempealeau. Marshland is on Hwy. 35 and 54 which join together in this particular stretch. If approaching from the north, look for the Marshland sign, and then a railroad track crossing. The trail access road is IMMEDIATELY after the tracks, and the road is to the right (going south). If approaching from the south, the access will be JUST before the tracks, turn left (going south). It looks like this:


After establishing where I would end up, we proceeded to the beginning of The Great River State Trail. The beginning can be a bit confusing too, as I will describe, but I have already done the getting lost..............so YOU won't have to.


Be aware that the Great River State Trail Visitor Center is NOT the trail head. Ha. I told you that finding the end was confusing...........and also the beginning. But I will explain all mysteries.


You can certainly go to the Visitor Center, because the helpful people there will tell you how to find the trail head which is about...........a half mile?..........away. When you drive down Bus. Hwy 35 from the north, and turn left (east) on Main Street, be patient and just keep going. The Visitor Center will appear on the left side of the street. The Visitor Center used to be located on Oak Forest Drive, but not anymore.

The trail head is alongside Bus. 35 (also 2nd Avenue South) just a block south from the Main Street and Bus. 35 intersection. Find the trail head parking area on the corner of 2nd Avenue South, and Irvin.
Notice that I am wearing orange. Bow season or not, I feel that being visible is a good thing. Besides, guns on the trail were present, since squirrel shooting was going on. I feel that I do not resemble a squirrel, but I take no chances.
The Great River State Trail's big feature is................THE RIVER! You guessed it. You will see it for much of the trip. If you don't see the Mississippi, you will cross other rivers that join it, view the river bottoms, and experience many trains, since this is a major freight corridor. At least two trains an hour. Going north, the tracks are to the left, sometimes visible, sometimes you just hear it. 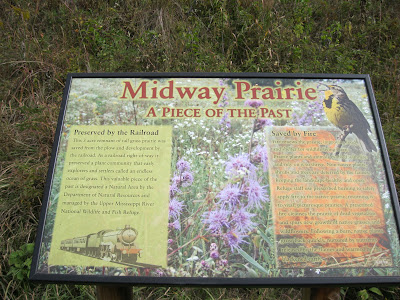 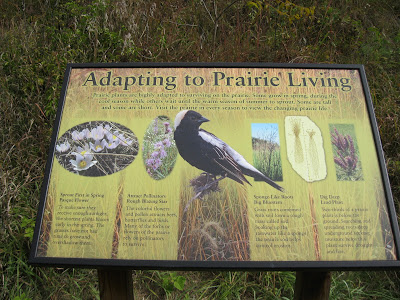 The trail will cross small highways multiple times, and will cross Highway 35 in Trempealeau, so stop and watch for traffic. 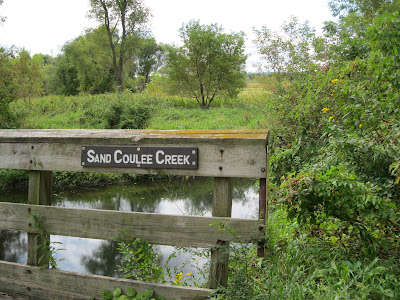 Creek crossings and river crossings means you will be meeting many bridges. No trolls. Some bridges were under repair: 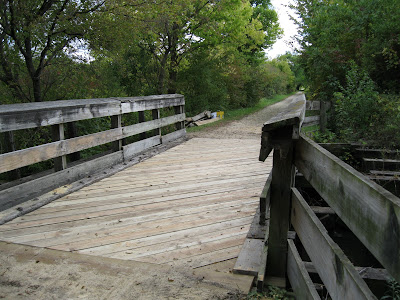 After Lytle's Landing, the Black River delta lay ahead with bridges crossing streams, and miles of wetlands in the Van Loon State Wildlife Refuge. Here I encountered the sounds of gunshot, and I was glad to be wearing the orange. I met a number of cyclists, all wearing dark clothing that blended in with the surroundings. Maybe I am overly concerned, but why not be visible?

I am unfamiliar with the rules about hunting, where one can/cannot shoot. I met two fellas on the trail, toting rifles of some sort, and it looked very much like they were shooting right from the trail. Squirrels. Black, gray, red squirrels........they held no prejudice to squirrel color, said the guy with no front teeth. His spiky haired companion agreed. Miles of river bottom surrounding me, I just exchanged pleasantries, and hoped I bore no resemblance to a squirrel.

When crossing the Black River, get off your bike and take in the view. What a wonderful private spot to live, and enjoy the sand bars. Maybe other kinds of bars too, it's WISCONSIN! 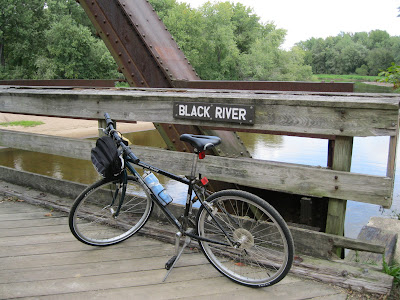 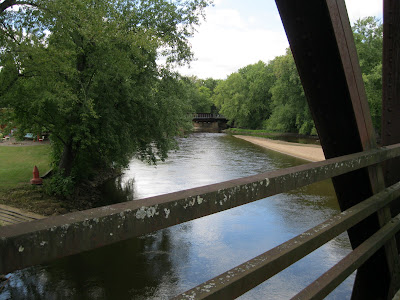 I then encountered one of the most charming and romantic sights. This man has an imagination. I think that bodes well for the future relationship. She said yes, right?
Of course, you know that I cannot post trail information without a photo of poop. Since my bear encounter on the Gandy Dancer State Trail, I've been a little obsessed with evidence left behind by bears........or wolves.........or, who knows?
Any wildlife experts, please use the comment section. I welcome comments from all, not just poop experts. Let's take a vote. Bear, wolf or dog. 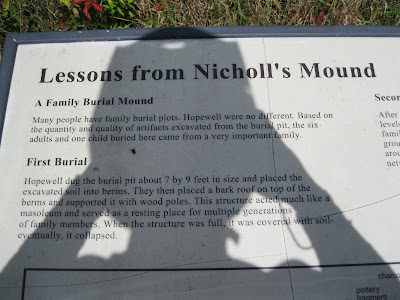 Since this is a good more-than-half-way point, you could bike the short distance into Trempealeau and have a drink of some sort, a potty break, and see the sights.
Bike the short distance to the west to the old down town area. It won't take long, it is small, but charming.
More than half way here. Just about ten miles left. The landscape opens up to wider views. 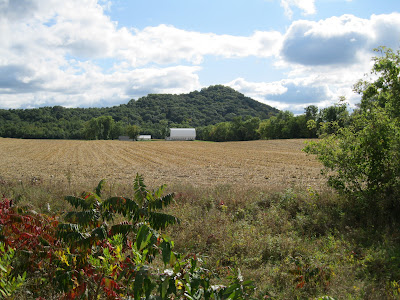 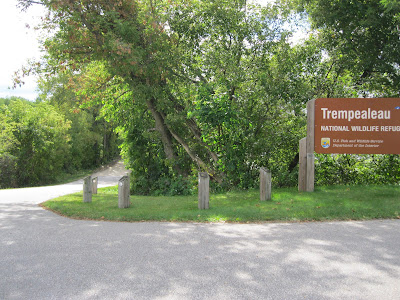 Here is another odd bit. For a few miles, you will actually be biking on a small road in the Trempealeau Wildlife Refuge. The "trail" goes down a hill (you get to coast!) to the west. Just follow it. After a bit it becomes a trail again. View the following photos, you'll see. 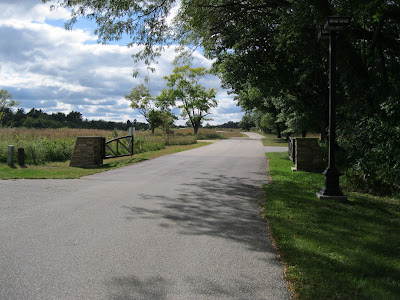 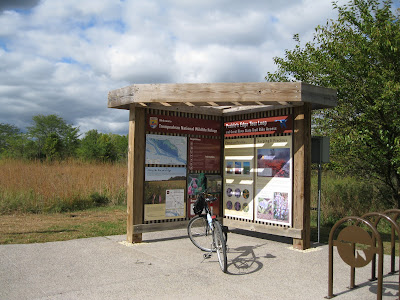 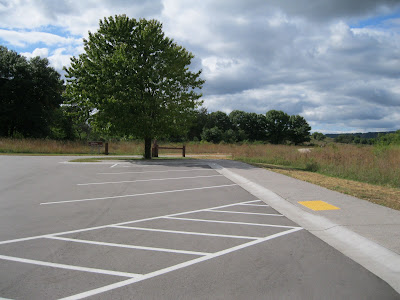 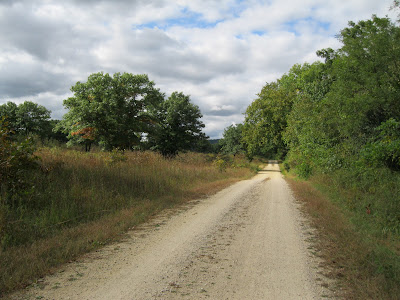 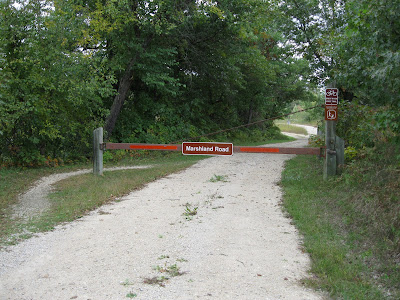 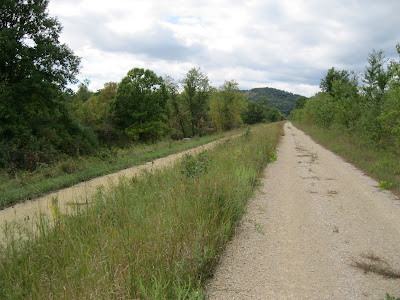 At this point, the trail turns into a bicycle turnpike, with four lanes. For some reason. Whatever. I took the high road, because that's what I do. 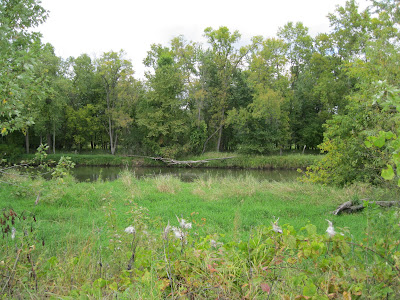 Marshland to the left, marshland to the right, and the town of Marshland ahead. During this time, I was hearing continuous gunfire. There must be a shooting range nearby. I was a bit apprehensive, imagining stray bullets, but this did not happen, and I am here to blog. Happy about that.
Mary was waiting in the car, knitting and reading. She was knitting a hat for me! I have it now, it is colorful, Norwegian looking, warm and quirky. Kinda like Mary.

On the way home, we stopped in Alma, one of my favorite river towns. We had a wonderful meal at: 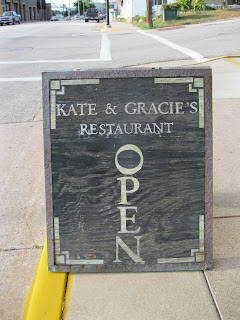 And then we strolled around the town. 'Cause we can. 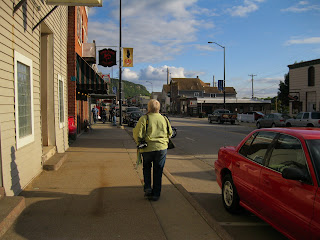 Those are the facts, Jack. I really like this trail, and the drive home along the river can't be beat.


Mantra: I may not get there first, but I'll get there.

Because the intention of biking all the Wisconsin state touring trails was confessed to the Bike Shop Boys, I have to follow through. I'm 58, out of shape, have creaky knees and grandiose ideas. I won't get there first, but I'll get there.